Some amazing pics of CX at WGT here. Best ones yet I think.

I’ve been out of touch for a couple of days while playing the WGT festival in Leipzig, Germany. This is a great festival, but it’s not open-air like most places. Basically for four days they take over every venue in the city and run non-stop concerts and parties. We were headling the Kohlrabizirkus venue on the last day of the festival, in other words, the top spot.

There were around 25,000 – 30,000 people at the festival, but the Kohlrabizirkus only holds around 4,000. That meant that it was filled to capacity several hours before we were due to go on, with hundreds (possibly thousands) of people getting turned away at the door. Even when it was sold out, the line of people outside trying to get in stretched all the way down the street!

I was seriously nervous seeing that as you can imagine, especially since we hadn’t played in five years, apart from the couple of warm-up shows in the past couple of weeks. But once we got on stage it was… incredible. We had a new light show set up for this one, with an 8 metre by 2 metre LED light wall that we had programmed for the songs. It was blindingly bright, but amazing to see. The audience went nuts from the beginning, and by the end the entire place was dancing and screaming for more. I even ended up crowd surfing…

We did a three camera video shoot as well, so you’ll get to see some of it once we get to editing some footage. For now, here’s a pic of Volker during Nightfall… 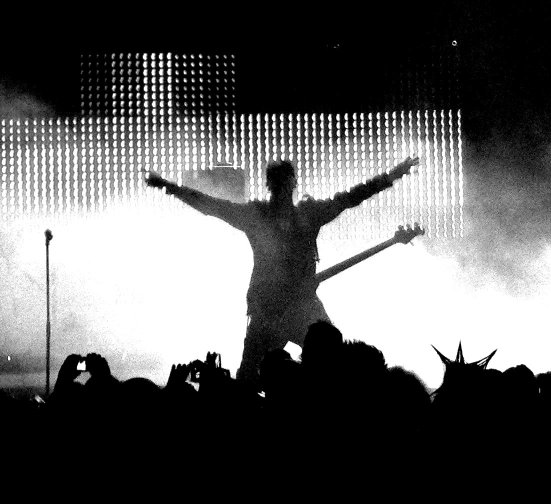 And just look at those LED lights behind us… 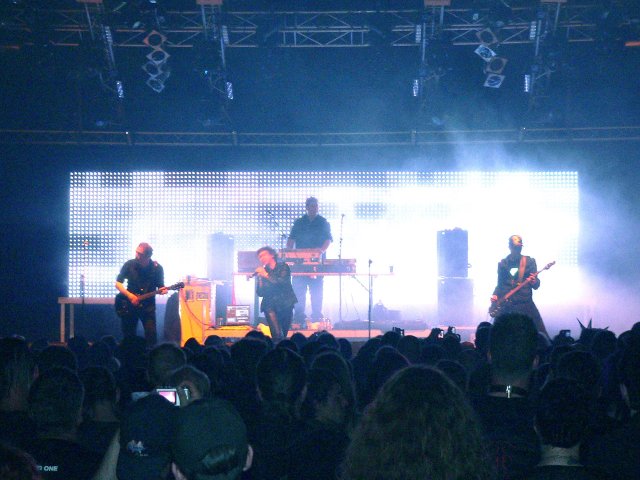 We just played Amsterdam. We were stunningly good, even if I do say so myself. Twice as good as London, if not more so. We had Slack, and lots of it. The audience loved it too

If this keeps going Leipzig should be a hell of a show next week. *Cross fingers*

Some nice pics from Gotham 8 from Wildblanket. I especially like this one: 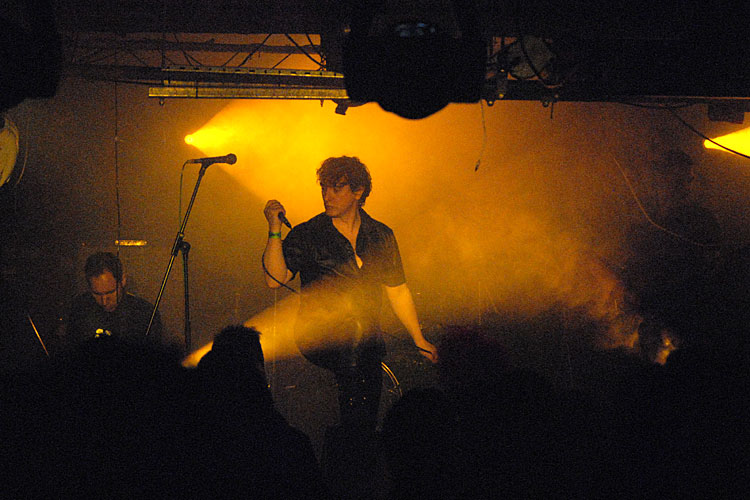 I was feeling pretty nervous about this show, we haven’t played in five years, and every time we played London in the past it’s been pretty horrid – London venues tend to not be of the highest quality in my experience. The fact that this was to be a festival with us halfway down the bill didn’t help much.

Luckily sound on the day was to be provided by my good friend Bob so that was a big plus right away. Unfortunately he didn’t have anyone to assist him, which was ridiculous, so the poor man was running round like crazy trying to do everything. Making it harder was the fact that the main band had several tympani (!), and various assorted orchestral style percussion as well as keyboards; the second band on the bill had a traditional git/bass/drumkit setup; and we had everything DI-ed! So completely different setups each time…

So anyway, after some soundcheck confusion, things got underway and the first couple of bands played. The first band, Karma Deva, were actually pretty good – if I hadn’t been running around talking to fans, signing autographs, and selling T-shirts (no, I’m not making this up) I’d have enjoyed them greatly I’m sure.

Didn’t see the second band because we were getting ready to go on, but eventually we took the stage… and I think I can safely say we blew the place away. Terry the lighting guy had been setting up some nice scanners and smoke machines, and really pulled out all the stops for us, so we looked good. The sound which had been very boomy in soundcheck settled down nicely and really poked.

Andy’s Guitar Rig system sounded fabulous on its first outing. It was funny to see the stage filled with amps from the other bands, and him just playing through his laptop. And still sounding louder than they did! I’m very happy with this system now, I totally recommend it.

Ironically the only problem we had was Volker’s Lexicon guitar FX unit doing something weird – so much for hardware being more reliable than software! I think we might go software based with his setup soon too, though having said that I’m really starting to like the new Line6 stuff…

I don’t have any pics yet, but I know some people took some. Will post them later when I get them.

Next Friday it’s Amsterdam, then on to Germany…

Anyone who was there and wants to post a review in the reply, please feel free to do so!

As I mentioned in a previous post, The Cassandra Complex have been getting ready to play some shows at festivals around Europe over the next weeks. We’ve got a pretty different live setup than the average band, so I thought you guys might like to see it:

Paul and I have identical setups so that if one computer goes down we have a backup. We’ve also got backing tracks as WAV files loaded into Andy’s Guitar Rig just in case both Cubases go down – it’s unlikely, but you never know!

We got Guitar Rig a couple of months ago, to experiment in whether we could replace all the guitar gear with a laptop and software. So far in rehearsal it’s been sounding great, but we haven’t had it on stage yet. We’ll see how it goes on Saturday. IF it all works out (and I think it will) we’ll probably replace Volker’s gear with a laptop too, either running Guitar Rig or Line6’s Toneport stuff. Or just get one of the new mega POD XTs.

Normally in the studio we use a LOT of synths and samplers, but we’ve tried to cut right down for these shows. We were spending too much time fiddling with stuff and loading times were becoming silly. So we’ve cut it right down to using HALion One for basic piano/string sounds (it’s not perfect, but it’s quick and it works); and Terratec Komplexer for synth stuff.

Komplexer is rapidly becoming one of my favorite plugins – it’s basically a Waldorf Micro-Q with a new (and much better) interface. Dead easy to edit and has some awesome analog sounds. Great arpeggiator too – we’re using that a lot live, synced to the drums inside Cubase.

We just got the Echo AudioFire 4s  because we really wanted some high quality, sturdy and stable audio interfaces that didn’t take up a huge amount of room. When you’re flying from show to show you really don’t want to lug around big racks full of stuff. The AudioFires fit that bill nicely – the AF4 is tiny, but it’s solid metal construction, so hopefully it’ll be able to take a few knocks.

We’ll see what happens on Saturday… And yeah, I am actually quite nervous I have to admit!