If you missed BIMFest, you now have a chance to see just how fabulous we were. 18Thanatos18 has posted a couple of songs on YouTube for your viewing pleasure…

For the real collectors out there, a genuine early publicity photo of us is now listed on ebay. This one is from way back around the time of Feel the Width, just before we did Theomania… I’m half tempted to buy it myself, just for the nostalgia value 🙂

BIMFest was great, thanks to all who came. Extra-special thanks to Emelie from Psy’Aviah for introducing us too! The first review is out already at the Reflections of Darkness blog. Here are the important bits…

Music & Performance
The announcement on the festival website said “THE CASSANDRA COMPLEX will prove they’re still alive and kicking…”. And this wasn’t promised too much. They were indeed very alive and kicking presenting a Goth-rock-wave-electro concert how you with it would be. Just one thing was missing: Volker with his guitar and bass. But also as a trio the band rocked! They did not need any big banners or video screens, how Rodney surprised stated after he was asked by the promoters… he just said on stage “We don’t have a big banner or videos. We don’t need that. We’re THE CASSANDRA COMPLEX!” True, good music, dedicated musicians and an audience willing to party is all you need for a good concert. The setlist contained several true hits. So, we could enjoy ‘What Can I Do for You’, ‘Satisfy Me’ or the heavily requested ‘Moscow Idaho’. During ‘Twice as good’, two fans entered the stage to give Rodney a hug who was just heavily smiling. He was in a real great mood, having a big smile in his face all over the concert, shaking his hips and shaking hands. Later in the set, he got a piece of paper from a girl in the audience with a music request… ‘Penny Century’. Unfortunately the band could not play this song because “Volker with his bass was missing” but anyway, we got one verse a capella. Great that there are still bands out there good for such spontaneous actions! Of course, THE CASSANDRA COMPLEX had to give an encore which consisted of ‘No Quarter’ and ‘March’. Fantastic show! I loved it a lot. Not much info yet, but it’s on January 30th at Nieuwe Nor in Heerlen, Holland (right next to Aachen, Germany) and will cost 12,5/15 Euro to get in. More info as we find out…

The Sun God album is out on Amazon MP3! This probably means that it’s also live on iTunes and eMusic etc. If anyone has an account with these stores could they check and let me know?

Oh, and would be great if someone could make a review… 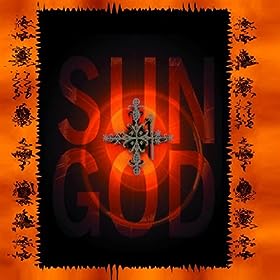